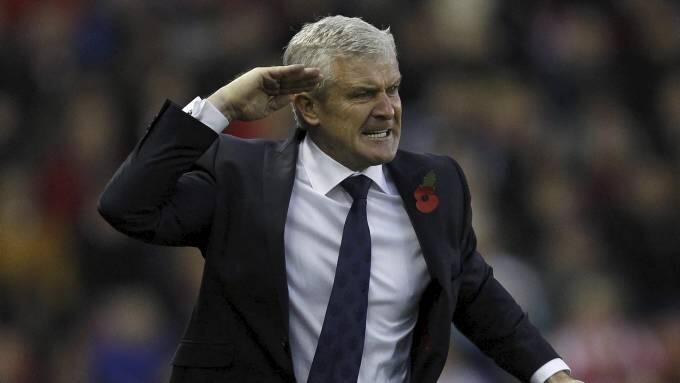 Paul Parker was right. And he was right because, unlike those in control of the club, he understands QPR.

An ex-Rangers favourite and Manchester United colleague of Mark Hughes, Parker told West London Sport after the Welshman’s arrival that his former team-mate would need to change his style in order to succeed as R’s boss.
You could argue it was a polite way of suggesting Hughes wasn’t the right man for the job. And he wasn’t.

- Successful QPR managers have tended to be charismatic, engaging characters – tub thumping, big personalities who acted as spiritual leaders as much as decision makers.

Even Alan Mullery, perhaps the worst QPR manager of them all, had some success. He signed Gary Bannister and John Byrne after all.
Hughes’ 11-month tenure was not without similar achievements.

The signing of Djbril Cisse, who had previously been found wanting in the Premier League, was a bold call vindicated by the striker’s role in keeping Rangers up last season.
And while Neil Warnock talked a lot about developing Adel Taarabt as a player, Hughes quietly did so.

Quiet nature
But it was that quiet nature, along with the folly of his employers – more on that another time – that did for Hughes rather than some supposed lack of tactical acumen.
Ian Holloway, Gerry Francis, Warnock and to some extent the likes of Jim Smith, Don Howe and even John Gregory during high points of their reign all fitted into that bracket.

Fernandes’ pal was a flop.
So does Harry Redknapp, who will do a ‘triffic’ job of lifting the club in the coming weeks, I’m very sure.

Others, like Hughes, had the knowledge but not the personality, and knowledge is worthless unless you’re able to make use of it.

Ray Harford
No-one demonstrated that more than the late Ray Harford, who had one of the finest football brains of his generation.
His seemingly dour personality made him a sitting duck at a club that was beset by problems and needed someone like the hyperactive Holloway, who later restored some much needed zest to the place.
If management was about tactics and preparation, the likes of Harford, Paulo Sousa, Hughes and others would have left QPR with their reputations enhanced rather than dented.

Once managers come across as dour – and in Hughes’ case, perhaps just not very likeable – problems on the pitch are quickly put down to them being clueless and lacking motivational skills.
Once that perception sticks, the game’s essentially up.
Hughes made the mistake of believing his knowledge and experience would do the trick for him. Some of his allies inside the club were scathing about Warnock’s methods.

Flair
What they failed to grasp was that Warnock, like other successful Rangers bosses, had his limitations but was first and foremost a manager. He managed. He managed players, fans and the media and did it well.

That’s what’s the job’s about. It’s not about theory, or “meticulous preparation” as Hughes continually called it. It’s about practice – the nuts and bolts of getting people behind you and instilling the right mentality.

Privately, Hughes would be sincere and complimentary about QPR fans, saying he really enjoyed their passion and the ‘feel’ of Loftus Road. He should have gone very public with that, but it wasn’t his nature to.

Some of his predecessors would have beaten that drum for all it was worth, got the fans on their side and created the kind of momentum that almost always transmits to players. It’s worth more than all Hughes’ dossiers and Pro-Zone stats.
He needed to get out and engage, kiss a few babies, make a disparaging comment about Fulham’s away support compared to Rangers’ – something, anything, to lift the gloom and build some momentum behind him.

Fans
He should, if nothing else, have gone on the club’s online show, London Call-In, last week, rather than continually leaving that kind of thing to Mark Bowen.
He should gone on there in front of the fans and stressed the need for his under-performing players to deliver for them, and urged them in turn to get behind the team and raise the roof for one big effort against Southampton, which  Hughes was convinced would be a turning point. That’s what leadership is all about.

Nigel Adkins is a leader and had Saints fans rooting for him.  Meanwhile, let’s be honest here, how many QPR fans were understandably thinking of what the up side to a defeat on Saturday might be? I think that had a bearing on the outcome of the game. That’s not the fans’ fault. It’s Hughes’.

Adkins led his men – his club – into battle.
Hughes, with his chairman sticking to his ludicrous and typically poorly judged ’cream always rises to the top’ message, failed to lead, and his overdue dressing-room tirade afterwards was too little, too late.

Hughes isn’t a leader, he’s a thinker, and that type of manager generally doesn’t succeed at QPR. He was quite simply the wrong man.

Harry Redknapp
Redknapp wouldn’t be my choice, but he is a leader and man-manager in the Warnock/Holloway/Francis mould and one I fully expect to give the club the kind of short-term shot in the arm that Francis did when he replaced Harford.
Another similarity between Harford and Hughes is that their spells showed the effect of having a dodgy centre-back cannot be underestimated.

You can have all the knowledge and tactics you like, but if you’ve got someone in the middle of your defence who’s as big a threat as any opposing striker, you’ve had it. To keep QPR up, Harford brought in Neil Ruddock, who was outstanding in what had been a problem position for Rangers.
When unable to keep Ruddock, Harford went for a carbon copy, Gerry Taggart, who at the last minute opted to join Leicester, where he was a crucial player in their subsequent success.
A chance was then taken on Richard Ord, who was crocked, so Karl Ready ended up staying at the heart of Harford’s defence, with inevitable consequences for his manager.

Mbia
Until the sight of Stephane Mbia leaving the pitch at Arsenal after being sent off, I always felt Hughes would survive – that he’d get enough points to keep Rangers up and keep his job, but not to justify the level of spending by the club. It was at that moment, with Mbia facing a three-game ban for vital matches that would decide the manager’s fate, I belatedly started to feel Hughes was in serious trouble.

Hughes cannot cite a lack of financial support for his demise, given the amount he was allowed to spend and the number of players he brought in.
He was, however, disappointed and concerned by the club’s failure to sign a commanding centre-back – which he regarded as a top priority – despite many attempts, and that concern was fully justified.
They ended up getting Mbia, who needed time to find his feet in England, as his early displays showed.

Sending off
He was getting there though and did well against Arsenal before his moment of madness. His replacement of Anton Ferdinand was absolutely pivotal to Hughes’ plans for turning things around.

I expect him to be an important defender for Rangers for the rest of the season and believe if Mbia had played against Reading and Southampton then, rightly or wrongly, Hughes would still be in a job.